The year 2014 is a landmark as it represents the anniversary of twenty years since the Museum opened its doors for the first time on September 11th 1994 with the exhibition ‘Byzantine Treasures of Thessaloniki. The return journey’. This way the Museum of Byzantine Culture was inaugurated by the Prime Minister. That exhibition with the inspired title marked the return of the Byzantine antiquities, on the 14th of June 1994*, after eighty years in the Byzantine and Christian Museum in Athens where they have been transferred in 1916. The exhibition also marked the end of a long effort for the foundation of a Byzantine Museum in Macedonia and specifically in Thessaloniki which is connected with persons and events of the recent and contemporary history of the Greek state.

In 1913, a decree issued by the Governor General of Macedonia, Stephanos Dragoumis, resolved to establish a “Central Byzantine Museum” in Thessaloniki (no. 746/21.8.1913/Gov. Gazette. Thessaloniki Appendix, September 3rd, page no 25-Decree of August 31st), which is to be housed at the Acheiropoietos Church. In a letter by the Archbishop of Thessaloniki, Gennadios, (no. 661/22.8.1913) the suitability of the place is suggested, which could be “the Central Byzantine Museum of Greece that is to be founded, if circumstances permit”. In this same year (September 9th, 1913) Adamandios Adamandiou, Professor of Byzantine Art and Archaeology at the University of Athens and chief curator of the Christian and Medieval Monuments since 1908, submits a memorandum (written on September 7th, 1913) “on the foundation and organization of the Central Byzantine Museum in Macedonia”, “a broad outline of the establishment and organization of the Museum”, mentioning among else the reasons, for which “the second capital of the Byzantine Empire, the official medieval city of Thessaloniki was selected by the Holy Providence to host the Central Byzantine Museum”. He goes on wondering “which place apart from the proudest and immense Byzantine city of Thessaloniki would be most favorable to host the most important central seat of research in Christian and Byzantine art, both in terms of its setting among east and west and of its historical significance through the entire Byzantine Empire?” Thessaloniki is “the city that symbolizes the national ideal of re-founding the great Hellenic empire”. The above-mentioned quote reveals, among else, the revival of the Great Idea and the patriotic enthusiasm; nevertheless, the political situations of the era necessitated the establishment of the Byzantine and Christian Museum in Athens. According to the article 1 Law 401/17-11-1914 (Gov. 347/Α΄/25-11-1914),“all the Byzantine, Medieval and Christian artworks from the early years of Christianity to the establishment of the Hellenic Kingdom are to be deposed there, except from the ones of Macedonia”. In the article no 9 of the above-mentioned Law it is clarified that “another museum could be founded in Thessaloniki, which is to include the antiquities of Macedonia under the supervision of the local curator of Byzantine and Medieval monuments”. On December 31st, 1915, when the allied forces of Entente debarked in Thessaloniki, the board of directors of the Byzantine and Christian Museum, following the recommendation of the Ministry of Ecclesiastical Affairs and Public Education, decided to send Adamandiou in Thessaloniki “so as to rescue the antiquities that, due to the circumstances, were in danger”. (Proceedings of the Fourth Session). Assisted by the lawyer G. Kosmetopoulos, Adamandiou collected and transported to Athens more than 1600 artifacts, which entered the Byzantine and Christian Museum and remained on display or in the store-rooms until 1994. 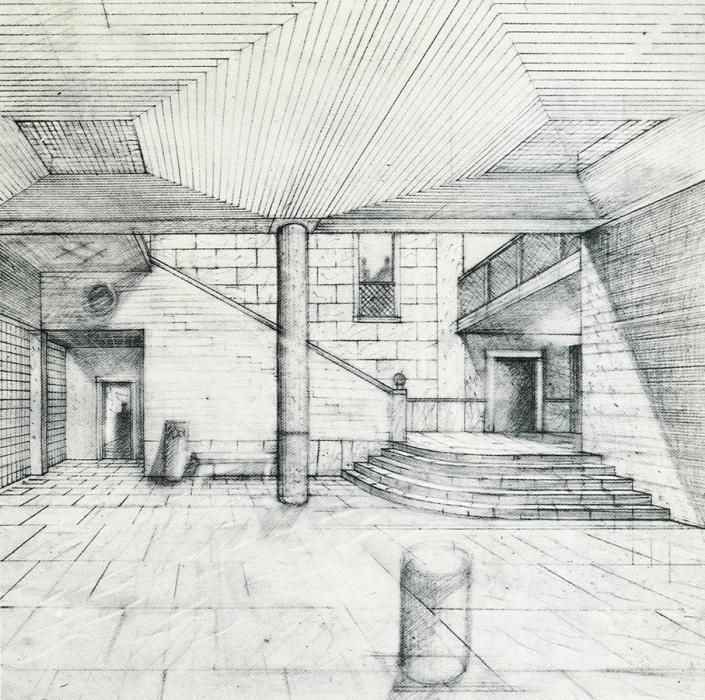 The interest in the establishment of a Byzantine Museum in Thessaloniki was revived during the period after military dictatorship, namely in 1975. By an act of the Central Archaeological Council (18 /25.05.1975) a nationwide architectural competition was proclaimed in 1977 for the Museum’s building. The proposal that was awarded was the one by the late renowned architect and painter Kyriakos Krokos, who was commissioned to prepare the final plan.

The first stage of the design was completed in 1978-1979, while the second one during the period 1985-1987, in collaboration with the architect G. Makri**. The confusion that arised regarding the concession of the land, a property of the National Defense Fund as part of the former Tsirogianni camp was solved in 1984 with the personal intervention of Andreas Papandreou, then Prime Minister and Minister of National Defence. In 1984 the building project was integrated within the Integrated Mediterranean Programmes of the European Economic Community, and was founded on February 28th, 1989 by the late Melina Mercouri, Minister of Culture at the time. The edifice was completed and was delivered in October 1993.

Following the recommendation of the Central Archaeological Council, the decision of the Minister of Culture Dora Bakoyianni on April 4th, 1993 validated the proposal of the 9th Ephorate of Byzantine Antiquities. This included the approval of the exhibition plan for the new museum, which acquired the name “Museum of Byzantine Culture”. The Museum of Byzantine Culture was initially an independent regional unit of the Ministry of Culture and Sports, as this was defined by the paragraph no 15 of the article no 7 of the Law Ν. 2557/23-12-1997 («Institutions, measures and activities of cultural development», Gov. 271/Α΄/24-12-1997).

The Museum regulation was to be established following a ministerial decision, which took care of its organization, operation and administration, its relations with the Ephorates of Byzantine Antiquities of the Ministry and all the other necessary details. This eventually became the act no. HMC / GNOS / 50304 / 26.10.1999 decision (Government Gazette 2018 / B / 11.17.1999), according to which the Museum was now established as a Special Regional Service, with its own director and would be hosted on the 2 Stratou Avenue and the White Tower. The goals of the Museum were articulated as follows:

Article 4, Goals: “The museum is a scientific institution, open to the public, of a broader cultural and educational nature, aims to collect, preserve, protect, conserve, exhibit and study the works and objects of the early Christian, Byzantine, medieval in general and post-Byzantine periods, mainly from the geographical area of ​​Macedonia and the excavation material of the territorial scope of the 9th Ephorate of Byzantine Antiquities, with which it is in close collaboration. The Museum of Byzantine Culture also works as appropriate with the other Ephorates, when this is necessary for the enrichment and fuller, better and more scientifically informed presentation of its reports. in the framework of the realization of its aims, the Museum of Byzantine Culture is addressed to the general public, encourages through appropriate activities the increase of the number of visitors, favors the entertaining and educational contact of the public with its collections and asserts a scientifically proven and internationally scholarly way of their museum presentation”.

Later, its structure and responsibilities are modified after the publication of the Decree 191 (Organization of the Ministry of Culture, Government Gazette 146 / A / 13.6.2003), according to the Article 56. The responsibilities are described in detail as follows: “…issues of acquisition, acceptance, storage, maintenance, recording, documentation, research, study, publication and display and promotion to the public of objects of the early Christian, Byzantine, medieval in general and post-Byzantine periods in northern Greece and of the modern era with subjects related to the Byzantine and Christian art. ”

** The word return is used also in the corresponding formal decision from the Ministry of Culture which approved the ‘return in Thessaloniki and the deposit to the Museum of Byzantine Culture of the following icons and relics which have been transferred and stored in the Byzantine and Christian Museum’.

Being a pioneer in the treatment of its exhibits, as well as its activities and the high level of the provided services, all equally treated, the Museum, The Museum of Byzantine Culture has been awarded the Council of Europe’s Museum Prize for the year 2005, distinction awarded to a Greek museum for the first time. The above-mentioned prize, one of the most important European distinctions in the field of cultural heritage, has been awarded annually since 1977 to a museum judged to a museum that has recently completed its permanent exhibition or its redisplay of its collection, recognizing a significant contribution to the understanding of a common European cultural heritage. The winning museum is selected on the basis of a shortlist presented by a jury of the European Museum Forum.The decision for the award was taken unanimously by the Committee on Culture, Science and Education of the Council of Europe Parliamentary Assembly on December 2nd 2004. This was announced to the Museum on December 15th by Peter Schieder, President, at the time, of the Parliamentary session of the Council of Europe. The jury appreciated “the excellence of the museum and the balance between conservation, restoration and presentation”, noting in particular the virtual absence of show-cases and the illustration of restoration work.The trophy of the award, Jοan Mirό’s La femme aux beaux seins (The Woman with the Two Breasts, 1969) was kept and displayed at the Museum of Byzantine Culture for a year. Today in its place a photographic reproduction of it is presented at the entrance of the permanent exhibition.
The Museum of Byzantine Culture was awarded the first (gold) award in the International Festival of Audiovisual Means on Museums and Cultural Heritage of AVICOM (F@IMP 2.0 2016), organized by the International Committee for Audiovisual Means and of New Technologies, Image and Sound of ICOM. The Museum was awarded in the long film category for the production of the film, titled “The Return”. The competition involved 33 museums and cultural heritage institutions from all around the world. The award ceremony took place on 22 November in the National Museum of Hungary in Budapest.Information on the website of the Ministry of Culture and Sports: http://www.yppo.gr/2/g20.jsp and of the organizer: http://www.faimpavicom.org/#/news 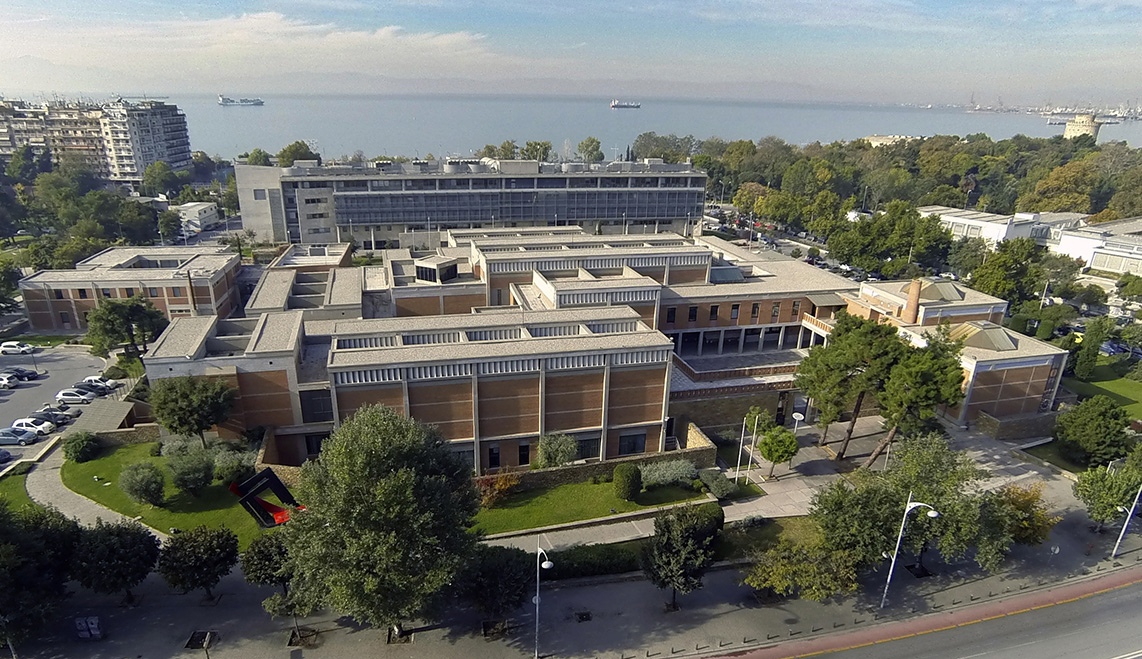 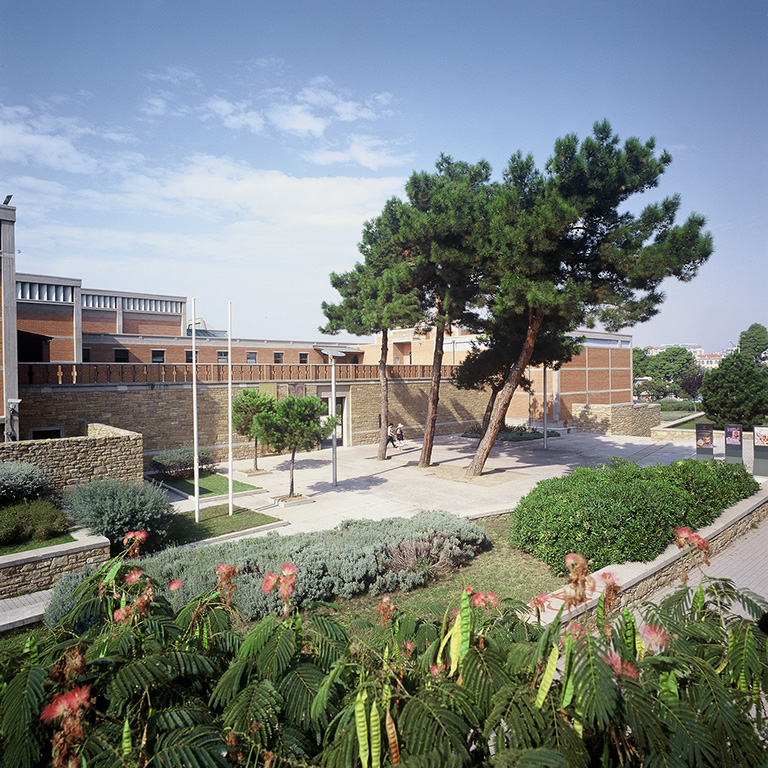 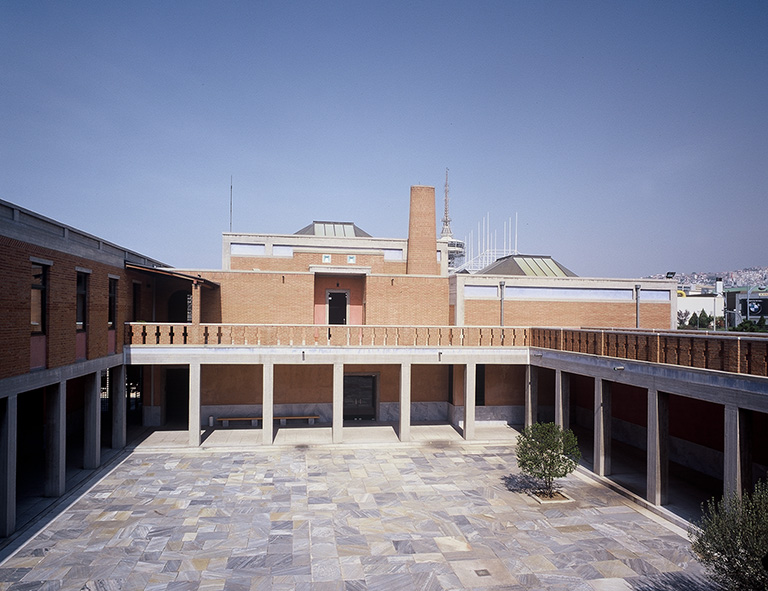 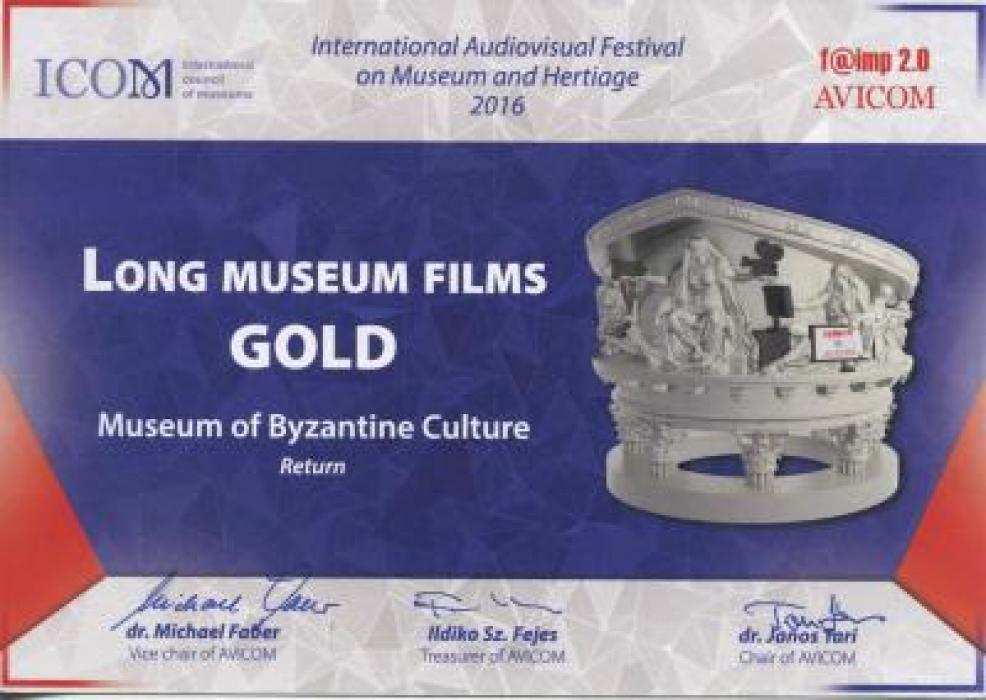 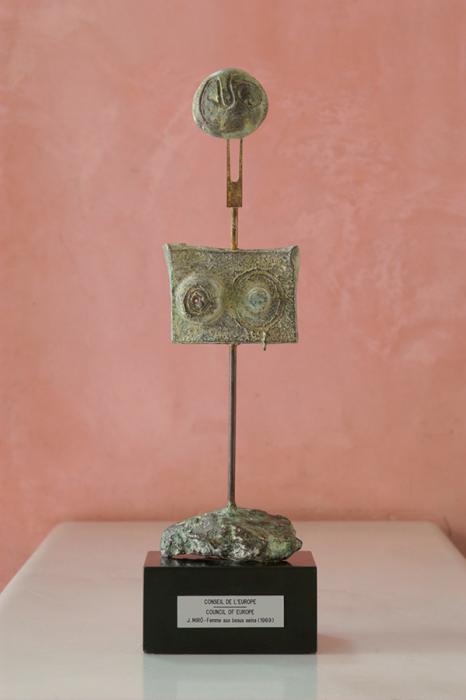 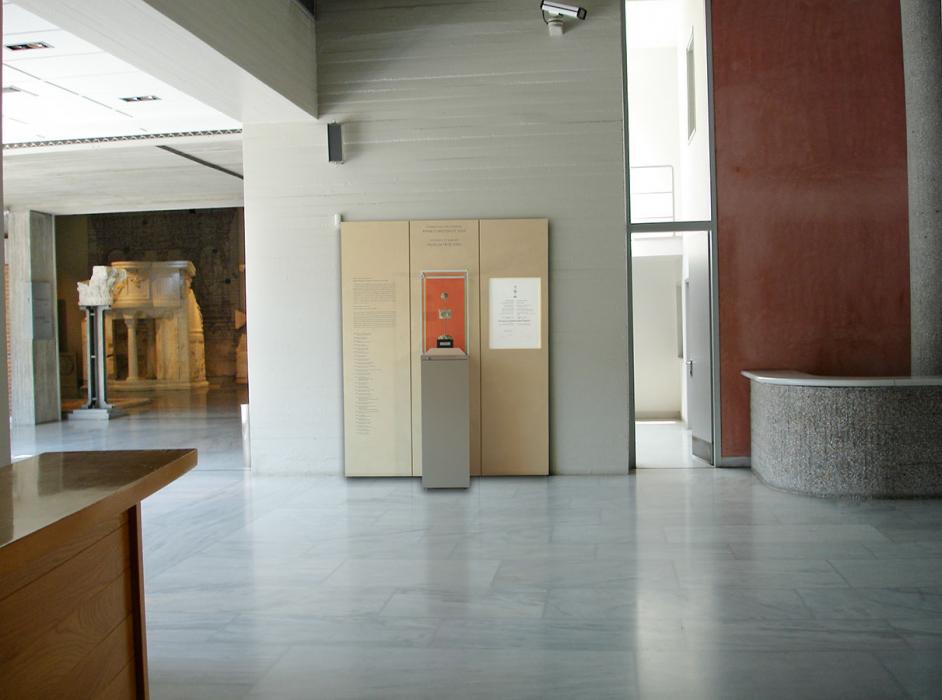